A Tale of 2 Doggies 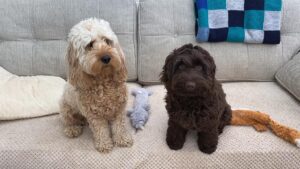 Many of you will know that I have two dogs – Hattie and Winne. Hattie is 2 and Winne is 5 months. They are great together but having another dog has highlighted how different they are temperamentally and behaviourally. Now I know Winnie is only a puppy, but she pushes the boundaries, is full of energy and trying to train her is an interesting experience, whereas Hattie is far calmer, less interested in pushing the boundaries – is more consistent and obedient. Part of that is age and part of that is that they are just different, but their differences work really well together and are complimentary.

So often we think of being different as something to be avoided and its better to blend in. being different from each other and unique is a God-given gift and should be cherished and celebrated. When Jesus called his disciples he didn’t call a group of people who had the same temprement, gifts and abilities. In Matthew 10 starting at verse 1 we have this list of them and some of their occupations before they were called:

Jesus called his twelve disciples to him and gave them authority to drive out impure spirits and to heal every disease and sickness.2 These are the names of the twelve apostles: first, Simon (who is called Peter) and his brother Andrew; James son of Zebedee, and his brother John; 3 Philip and Bartholomew; Thomas and Matthew the tax collector; James son of Alphaeus, and Thaddaeus; 4 Simon the Zealot and Judas Iscariot, who betrayed him. Matthew 10:2-4

Some of them we don’t know what they did because the bible doesn’t tell us but we do know that:

Matthew was a Tax Collector.

Simon was a Zealot – may have been a politician or revolutionary trying to overthrow the Romans.

Judas was a thief.

They were all different because they had a different part of play in being used by Jesus.

We are all different for a reason – we all have different temperaments, abilities and gifts because there are different ways God can and wants to use each one of us. Someone said:

“You may not think the world needs you, but it does. For you are unique, like no one that has ever been before or will come after.

No one can speak with your voice, say your piece, smile your smile, or shine your light. No one can take your place, for it is yours alone to fill.

If you are not there to shine your light, who knows how many travellers will lose their way as they try to pass by your empty place in the darkness?”

Just as the disciples were called by Jesus, so too are we and he invites us to bring his kingdom in and share his love and life as we go about our daily lives. Only we can do that. And we do that with the same authority, power and calling as his first disciples did. They were not special or extra ordinary, they were just like you and me.